I took the old girl out for a little half hour ride today after filling her up with petrol.  I zero’d the odometer so I can check the mpg.

She felt strange after riding almost nothing but the little Address for two years, but I soon got used to it.  The bit I kept forgetting was to change down gears as I approached a junction or roundabout. 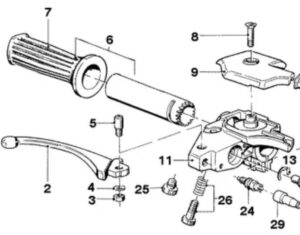 She has a little peculiar quirk which may help the mpg:-

The twistgrip pulls the throttle cable via a gear mechanism. The mechanism has a tight spot at what seems like half throttle.  So when I open it up to the tight spot I’m probably generating around 20-25 bhp which is easily enough to cruise at around 75mph and ample acceleration for normal road use.  But open past the tight spot and I get more acceleration and a top speed of around 105mph.

I had a problem when I got home though.  Our house is built on a steep hill and there are wooden gates that need to be kept closed to keep the dog in.  I pulled up in the street facing the gates with the hill descending to my left.  I put the prop stand down, and leaned the bike over, and over.  Because of the hill she went over a long way, but the prop stand held.  Then I had to get off!  Because of the hill, and the lean of the bike my left foot hit the ground about 3″ lower than it would on the flat.  Although I am 5’10″I only have a 29″ inseam this extra 3″ made it really difficult to get off the bike.  My right leg just doesn’t go that high.  I finally made it, and got off and opened the gate, and just managed to get back on the bike again.  But because my left foot was further away and further down I could not lift the bike off the prop stand.  So I had to dismount again (with difficulty) and push the bike upright from the side, then push it through the gates.  I must have looked a complete idiot.

For the past two years I have been used to stopping with the wheel of the scooter up against the gate, leaning over the handlebars, opening the gate, and riding through. I have also been stepping through the scooter to mount and dismount so I must have lost some movement in my hips without noticing.

I will find a way around this, and I intend to do some exercises to get some flexibility back (I guess swinging a leg over a motorcycle would have retained that flexibility),  but this episode may be a foreboding of the end of my motorcycling.  But that day is not this day.

I decided to give the old girl a wash. When I was restoring her I got some cleaner degreaser called POR 15. Despite claims, it hardly at any impact on the dirt on the bike.  I then tried using Muc-off which worked really well. Almost as good as the Gunk degreaser of forty years ago (modern Gunk is nothing like as good). 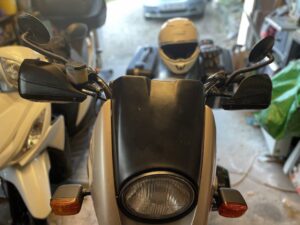 I also fitted some Barkbuster Storm hand guards.  Fitting was OK after I wrapped some aluminium car body repair tape around the bit that goes inside the handlebars.  Before that I could not get the fitting to grip.

I took her out for a short (1 hour) ride today. Air temperature was about 9C but the hand guards in combination with the Oxford heated grips (at 75% setting) kept my hands warm.  The bike started well and ran very well. But I felt a bit stiff when I got off the bike.  This was along Cornish A and B roads.  I think my days of long rides on the old girl are over.