She has been off the road again for almost two years since the start of Covid. I have just sold my Honda SH300i so I have some room in the garage and some spare cash

I got the old girl MOT’d and taxed today. I had to stop on the way to the MOT station to do the “Bing Dance”. This happens when some dirt gets stuck in the needle valve and petrol starts dripping out.  You don’t notice until you slow down and the bike does not idle properly as one side is too rich.
So, turn off the petrol, bike on centre stand, remove float chamber, empty into petrol tank, wiggle float up and down, replace float chamber, turn on petrol and away we go.
Sometimes it can be cleared when riding.  Turn the petrol off and keep riding.  After a while the bike will lose power, of course, then turn the petrol on again.  The needle valve will have opened wide, and the rush of petrol into the float chamber may clear it.
This is a regular occurrence. 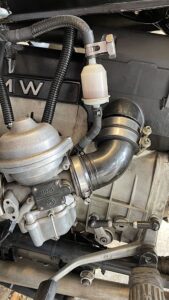 I have a fuel filter fitted, but still the dirt from the tank may be getting through. Maybe I need a better filter.  There are hundreds of them on line. 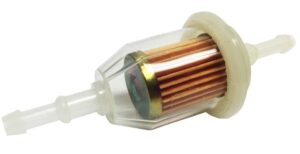 The font of all BMW knowledge, Snowbum recommends a Napa 7-02323, which (of course) is not available in the UK.

It is probably not dirt in the needle valve which is causing the problem. I had a look in both float chambers and there was no debris.

The bike  was made in 1983 so it’s 39 years old, and, to my knowledge they are the original floats and needle valves in the carbs.
Snowbum reckons they should be changed every 30,000 miles and the bike has done 47,000. 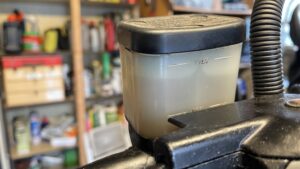 I also noticed that the fluid level in the brake fluid chamber was a bit down. Now has that just settled since the last time I used the bike (two years ago thanks to Covid) or have I a leak? 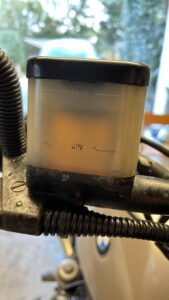 I topped it up and I’ll keep an eye on it. The chamber is not vertical so here are the views from either side 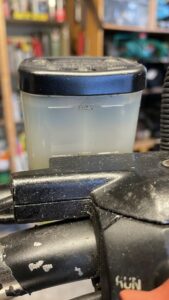 The day before the MOT I went out to start the bike for a test ride. (illegal actually – as it wasn’t taxed! So how am I supposed to check it out before an MOT?). It would not start. The starter solenoid would not engage as the battery did not have enough oomph. I put it on charge for a few hours and then it started fine, but the battery may be on the way out. It is an Enduroline 51913 from Tayna and is five years old. It has never gone flat, but it has sat in the garage with months between top up charges. The last one may have been a month or so ago. Something else to keep an eye on.

The MOT station also gave me an advisory on a dent in the bead rim of the back wheel.  These things have a tendency to change from advisory to fail as the rules get tighter.  She will not need an MOT after 2024 but I suppose I had better get it fixed. The MOT tester recommended Maidstone Motoliners. Maybe when the bike is off road again for the winter, probably in November, I’ll get it sorted.