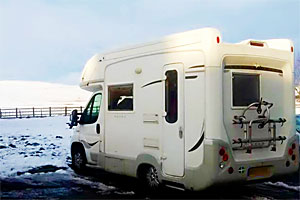 We knew little about motorhomes although I had had two Mazda Bongos before (A really nice one, written of by a guy jumping the lights, and a pretty awful one which I traded in against the Nuevo).

There are only two of us, and the motorhome, hereafter referred to as “the van”, will theoretically sleep 4. The extra two would really have to be children to fit into the Luton area above the cab and not mind sleeping together. We find that area invaluable for stowing our instruments (Guitars mandolins, banjos, ukuleles and others) and folding chairs and all sorts of light weight bulky stuff.

Although six years old the van had only 10,500 miles on the clock when we got it, this is not unusual for motorhomes. They tend to be based on commercial vehicles which are designed for much higher mileages.

After six years we have added about 80,000 miles to the clock and have spent hundreds of nights in the van, from the depths of winter to the elevated temperature of recent summers.

We almost never use campsites, we stay in remote locations, laybys public carparks (when allowed) pub carparks and sometimes in residential roads.

When we got the van we were delighted with it (we still are BTW) but found that the weak point was the habitation electrics. Now I am a retired electronic engineer so I saw this as a challenge so much of content here is about modifications to the electrical system in the van.

But some of the content is simply sharing the way we manage our particular way of van life. Much of this information was written a few years ago, and some has been updated of late.