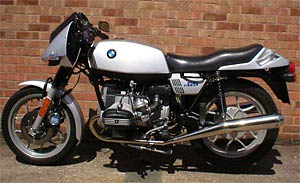 It was an impulse buy. I had started to restore my very rusted 1984 BMW R65LS and it was dawning on me that, with the time I could spend on it, this would be a 1-2 year project. During that time I had no bike. 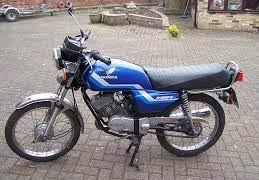 So I thought how about getting a little runaround? I used to have a 99cc Honda H100 which was a great little bike. I decided to peruse Gumtree for motorcycles in Cornwall. 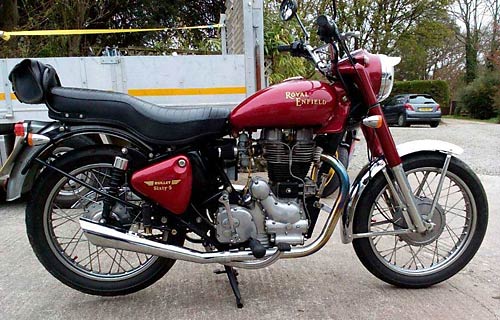 Up came a 2004 Royal Enfield Bullet. It looked wonderful.

I knew very little of Royal Enfields other than they are very popular on India.
Over the years I have had Triumphs, a Matchless, a Kawasaki, Honda’s and the BMW but never a Royal Enfield.

Why did it appeal to me??? I grew up with British bikes. Back then my bike was my only method of transport. Servicing and maintenance had to be rushed as it was needed to get me to work. And I did not have much money so keeping my bike on the road was often a make do and mend affair.

Despite this, my Triton (Triumph T110 engine fitted into Norton wideline featherbed frame) took me twice to Spain from Newcastle, multiple rallies, including four trips to the Dragon Rally in Snowdonia in February.I knew the bike very well. On one trip my friend’s Triton lost all power. By the side of the road in lightly falling snow we removed the head and barrels and unpicked the piston rings with a nail file. Some broke. Instead of 3 compression and one oil ring on each cylinder we could only manage to salvage enough to put 2 compression rings on one piston and 1 compression and 1 oil ring in the other. But we got home.

I recently sold a Honda Deauville. It had been sitting for a few years and I had to get it running to sell it. It wouldn’t start. After half a days work, just to reach the plugs, I found all four plugs (yes, 4 on a twin cylinder!) were defective. Another half day was taken in putting it back together. This is too long to change spark plugs. About twice the time to change piston rings on an old Triumph

I am busy restoring my ideal bike, my old sadly neglected BMW R65LS. It’s a simple design too and unlike my Triton it doesn’t leak oil has very little vibration and starts very reliably.

But it’s probably a two year project and I really want something to ride in the meantime. Hence the Bullet.
I’m hoping I can get it sorted to my liking within two weeks – most of which will be waiting for delivery of parts.

The riding position does not suit me. The previous owner had fitted trials bars and they are too high and wide for me. I have ordered some lower and narrower bars. 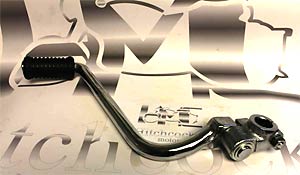 Also the folding kick start folds from the top and means I can’t get my foot on the foot peg comfortably. Curiously I could find no-one else complaining of this on the web. I’ve ordered one that folds from the bottom.

I think it’s a bit noisy. It is fitted with a short mega silencer but I was given the original – a Brituro with lots of rust patches on it. I will compare and contrast the audio qualities of both.

I really want to fit my Givi top box (from the Deauville) on the back but there is no carrier. I made a simple bracket for the Deauville – I may give that a try.

I have ordered a crash bar – just to save it when it inevitably falls over at some point.

Update. The crashbar didn’t turn up.  No explanation!  Refund requested and given without comment.