I followed the manufacturers instructions for running in the Himalayan and it was very tedious. Below is Suzuki’s recommended procedure for running in. 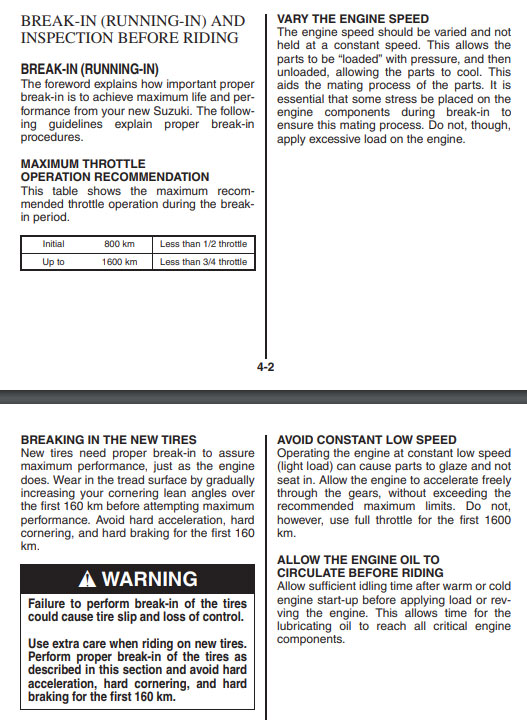 The Himalyan was bad doing 300 miles at under 40mph, but what speed does a 100cc bike do at half throttle? (about the same as a 50cc scooter flat out I suppose!!) Actually it’s not too bad. On the flat with no wind the Suzuki seems to manage about 60mph. Resistance goes up as the cube of the speed so at half power speed only drops by 20% to around 45 (faster than the Himalyan recommendations)
Going up hills is another matter. 4.7bhp will get me up a 10% gradient with no wind at 30mph. The full 9.4 would manage around 45mph.

Using the same formulae. the BMW would manage 83mph, the Himalayan 66mph and the Bullet 62mph. (this takes into account weight but not differences in drag factor which would make the bikes slower than the scooter)

Alternative running in procedures.
I think a lot of the manufacturers advice is based on avoiding warranty claims in the first year or so.  After that most warranties are invalidated by not being serviced at  extortionate cost by a dealer.

The dealer is around 12 miles away, but I can easily come back the long way round andf put 20 miles on the clock before I get her home.

It looks like some Tesco oil 10w-40 part synthetic which I have should do the business. I’ll need to source an oil filter.

Update 16/8/2020
I now have the bike and I find that at half throttle it can go at around 40-45mph on the flat in still air. I actually managed 60mph down hill. I did give it a few short bursts of full throttle in the first 25 miles.

The dealer has given me a sheet with different running in instructions.  Basically it says simply:-

I am going to do an oil change at 100 miles or thereabouts, and get the first service done at 600 miles by the dealer to maintain the warranty.
After that I will do my own servicing. It looks quite easy. There are two excellent videos on youtube.