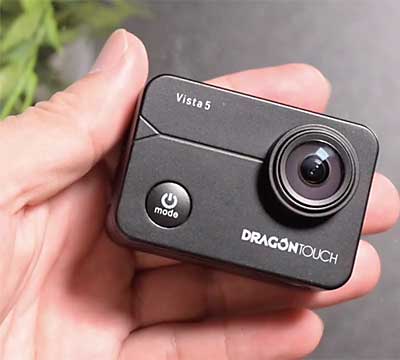 So I bought an action camera – a Dragon Touch Vista 5.

This was with the idea of taking videos of our dog Meg, and also on my scooter.

It was a lot smaller than I imagined. It came with two batteries, but no memory card. So I had to buy a 64Gb micro SD card. 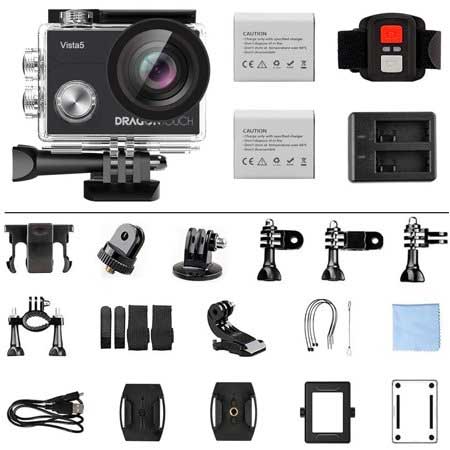 It also had lots of mounting accessories and a waterproof case.

It does lack a few things though. In particular a lens cap.  Out of the case the glass  (or maybe plastic) of the lens protrudes and if it is laid face down it rests on the lens. Also when carrying it will get scratched in a pocket.
In the case the lens window is open to get battered by bugs and road dirt when fixed to the bike.

It is not ideal for selfies as the screen is on the back.

But how should I set it up for videos?  I made a trial video at 2.7K and 30fps H265 For software I usually view with VSL media player and intend to edit with VSDC.

I could not see the first MP4 properly on VSL Media player – possible because I am using an older laptop running windows 7. (64bit) Maybe this is more than VSL and my computer can manage. Anyway I changed it to 2.7K and 30fps H264 and it worked. I also found out that Youtube recommend MP4. H264

I don’t know how happy VSDC will be in the higher resolutions.  For now I will stick to 1080 and HC244.
I mounted the camera on my helmet and took a ride. There are some issues using this technique

Bottom of the stalk is better than the helmet mount. But due to the amount of rubber involved the camera vibrated severely when the bike goes over bumps. This was more than the excellent image stabilisation could cope with. 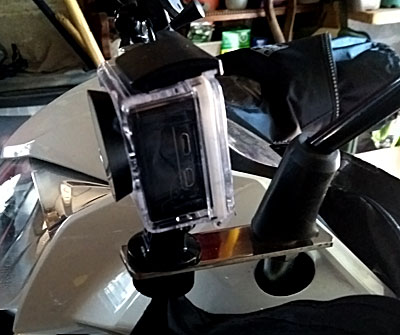 A more solid mount was needed.  I had an old stainless steel mounting bracket from a Royal Enfield Bullet silencer which, with the attention of a hacksaw and a drill, I made the new mount. 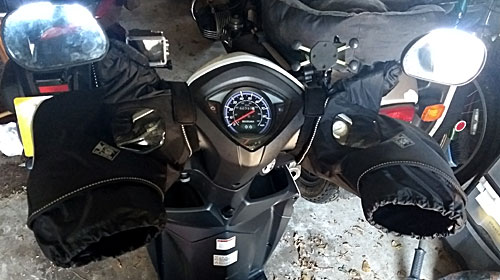 And here is the handlebar arrangement showing the muffs, the camera, the clock, and the phone mount.