We have a scooter.  It’s a Suzuki Address 110 and weighs 100Kg so should be OK for fitting on a rack on the van. But first some calculations are needed to ensure the van is operated safely. 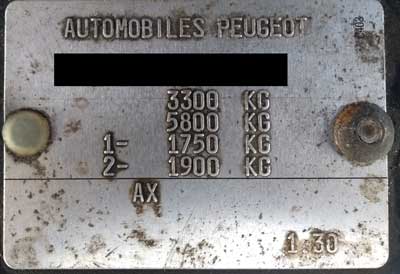 The original Peugeot plate shows a GVM of 3300kg.  This seemed at odds with some other specs I had read so I queried it with Autosleepers.  Apparently it should gave had a small mod before delivery which uprates the GVM.  I contacted Autosleepers in 2014 and they carried out the modification and fitted a new plate.

The new chassis plate shows that the rear Axle can take up to 2000kg, and the front Axle up to 1750kg, but the combined weight can only be 3500kg or less. 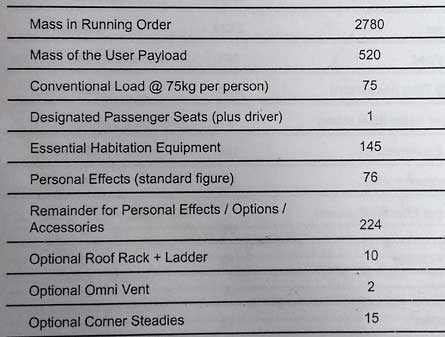 The handbook indicates  that Mass in Running order is 2780kg. Subtract that from the 3300kg maximum weight and we get the 520kg.  BUT the upgrade boosts this to 720kg  Hoo bloody ray!!!

The handbook also suggests that after taking typical figures for equipment and personal effects, the typical weight left over is 224kg.   Now I usually travel with my wife and dog which will add around 75kg. That leaves 149kg. Now the scooter and the rack together weigh 130kg so there would appear to be only 19kg to spare IF I had not had the modification. But now I have 219 kg to spare!

What I need to do is to load up the van as it would be for travelling and get it onto a weighbridge. If the total weight is more than 3370kg I will need to think about how to get the weight down before fitting a scooter rack, but I don’t think it will be close to that.

I’m heading North for Christmas so the plan is to get the van loaded as much as possible. get it weighed, then weigh any extra bits going in and out.

After that I can work out the effect of the scooter on each axle.

Now, if I were to load up to the original handbook limits I’d only be adding 130kg which is less than the extra 200kg allowed.
The original spec allowed 520kg as max user payload. If we used up to this figure, and it was distributed evenly it would be 260kg per axle. i.e. 1568kg on the front and 1732kg rear.  The scooter would change this to  1481kg front and 1949kg rear. This gives us margins of 269kg front and 51kg rear and 70kg GVM.
Now we are unlikely to use up to the 520kg anyway,  (the weighbridge will reveal all) so there seems to be no obstacles to getting the rack fitted.
It would seem prudent to stow any heavy items (such as extra water, and the passenger!) as far forward as possible.

So I went to a public weighbridge – Kernow grain services
They measured the weight of the van with me my wife and the dog in it, and not a lot else as 3380kg.  According to the manual the Mass in Running Order (MRO) is 2780kg. That includes the essential habitation equipment and the driver.  Other bits and pieces, (including the wife) may total arround 100kg so that would be around 3000kg.  The weighbridge disagreed by 500kg!

I find it difficult to believe that the van is 500 kg heavier than the book weight – that is five motor scooters! Three and a half on the back and one and a half on the front.  Maybe a previous owner has used it for smuggling and the chassis is filled with gold bars!  Or more probably the weighbridge needs calibrating.  The general opinion on the Autosleepers Owners forum is that the manual is pretty correct.

I think I’ll go with the manual figures.

But we need to know what the weight was on the axles without the scooter or rack. The handbook gives us 1308 front and 1472 in running order – which is without any payload. If we add the max original payload of 520Kg and distribute that between the two axles it gives 1568 front plus 1732 rear.

Dammit – I think I’ve just calculated myself out of the idea.

BUT there IS a solution. The Easy Lifter Hydra Trail has its own wheels on casters and is rigidly fixed to the tow-bar. OK, I don’t have a tow-bar so that is and additional cost over the £1600 for the “trailer”.  But it would fit on any vehicle with a tow-bar.  So that will cost me over £2000 including the tow-bar.  But I guess it’s an investment.