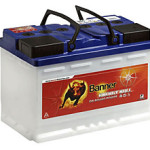 It’s around four years since I wrote the last article on the electrics. The mods have worked very well, we have used the van two or three times a month without any problems. But the Banner Leisure battery was starting to struggle. Sometimes we would see the lights flicker as the water pump or the loo flush motor was running. The lights have built in regulators and will dim if the voltage falls below around 12V.

I decided to estimated the capacity of the battery. I charged it up using a CTEK charger on the reconditioning mode.
Then I connected a 55W bulb across it for 4Hrs. So I took 4 x 55/12 AH or 18AH from the battery. I then left it overnight and measured the open circuit voltage next day. It was 12.3V which indicates about 50% charge.
So the 110AH battery was down to around 36AH.
Now I must admit I was a bit surprised and a bit disappointed. The 110AH Banner battery had never had more than about 20-25AH from it so discharge would been closer to its 75% than 50% of its original rating. But it had been used for four years, so has seen quite a number of shallow cycles. 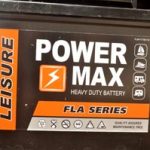 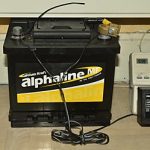 A rethink of the charging arrangement was called for.

The CTEK battery charger has a well developed charging cycle. The first phase is a constant current charge at 5A to push the voltage up to 14.4V. Tis is called in Battery terms, the “BULK CHARGE PHASE” Then it sits at 14.4V as the current gradually reduces. This is the ABSORBTION PHASE PHASE. Now this is not some magic in the charger – if you try to put 14.4V across a battery that is not fully charged the initial current will mainly be limited by the resistance of the connectors and cables. Then it gradually reduces until it is taking quite a low current.
In the Van, the alternator takes care of this stage.

Then the CTEK increases the voltage to 15.8V to “normalise” the cells. I.E make sure they are all fully charged and one cell is not stopping the others getting fully charged. In my charging system I can do this with a boost converter boosting the alternator voltage. Not sure I want to take it to 15.8 V as it will happen every time I do a long run. Maybe 15V may be OK.

The it puts the battery on a float voltage of 13.6V where it takes very little current. The only way I can do that is with a solar panel and a regulator such as a Buck converter. The current required is so small that a small solar panel could manage even if it were very cloudy. I would need to ensure that when left for days or week , the battery was not discharging overnight. I.E. NO steady drains. But when on site the fridge re-igniter rears it’s head.

On site, the biggest daily drain is, believe it or not, the fridge re-igniter which takes only 80mA! But its on 24 hrs so its almost 2AH per day. The LED lights by comparison are around 1.5AH per day.

I am currently using a 44AH battery and under average use I will use about 4AH per day – lest say 10% of available capacity.
There is a very fast charger built into the van, it is the combination of the engine and alternator. But I really have no idea how long it will take to charge a 90% charged battery back up to 100%. Neither can I find any authoritative posts on the web. It’s another data gathering exercise.

But first it was time to carry out a long (four year) overdue job of tidying up the electrics.