The Varta was 4 years old.  I had got the feeling it was a bit down on capacity, but it’s a bit immaterial. I managed to flatten it by leaving it for a few weeks with a light switched on.  Unfortunately the weather has not been good, and te solar panel with a few hours daylight per day could not compensate for the light on 24 hours per day.

I charged up from my wonderful little Ctec battery charger, but it’s only 5A and so it took quite a while. But we headed off for a 3-4 week tour up North.  The battery was good enough for a couple of overnight stays, but the o/c voltage could only reach about 12.3V and the solar panel could only pull it up to 12.5 (as opposed to the usual 13.2V.  We really need to be able to last a week or more. 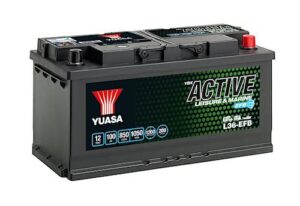 It looks like technology has moved on and the LDF90 is no longer made. My goto site recommended an Exide ES900, but it looks like a Yuasa L36-EFB (enhanced flooded Battery) is even better.

But sod’s law raised it’s ugly head.  When I drove the van back from the storage place, the brakes did not feel right. So we took it to our local garage. Fishers garage were amazing. Despite being really busy, they replaced my front brake discs in the morning and the rear ones after their normal closing time.  They also temporarily sorted the handbrake next morning and we set off in the afternoon. I cannot recommend them highly enough.  We entrust our car and the Nuevo to their care.

As we travelled, the battery charged up from the engine, but next morning it was down to 12.3V, or 60% charged.  With some more driving around it got up to 12.8V (fully charged), but  next morning it was 12.1V, or 40% charged.
Yep, it was knackered.  So we ordered a Yuasa L36-EFB from Tayna, who in their usual style had it delivered to a relative in Lancashire next day.  Yuasa are selling this battery for £320, Tayna are selling it for £115.
It is now fitted.

It has been in two days, and the voltage is now showing 13.2V, which means that our short drive today (20 mins tops), and the 40W solar panel have, between them, topped it up from it’s work last night powering the lights and charging 3 phones, laptop, and ipad. It’s only 4:30pm. the sun is still shining and the solar panel controller has disconnected the panel to prevent over charging.

I think, but for my own carelessness, I could have got longer out of the Varta.  Hopefully I will get longer from the Yuasa.