UPDATE
I managed to flatten my leisure battery!
Bummer.
I left the van parked up with everything switched off but I forgot to switch off the fridge and it was on battery power.
Now the fridge is switched off when the engine is not running BUT I left the fridge door open and the fridge light was on.
It’s only 2 watts but that corresponds to 4 ampere hours (AH) per day. It was March so the wee solar panel contributed very little.  A month results in 112 AH – so flat battery.
I should have used the isolator switch.  Anyway I charged it up again with the CTEK charger and it’s working OK but capacity is almost certainly reduced – but to what?
After charging the wee solar panel has kept the voltage of both batteries around 12.8V

Back in 2014 when I first did my calculations I estimated that phones, tablets, and computers would take an average of 14AH a day while were out and about at festivals and on holidays.

Things have changed in five years.  The technology items have got more power hungry and we find that we use the van a lot to visit folk so we spend a lot of time sitting in it. So we use more power demanding technology more often – a classic double whammy.

Here is what he have been doing over the last (incredibly wet) week in the van. (most charged from Buck/Boost converters so capacities normalized to 12V)

If you compare my various estimates you may see that they vary from page to page.  Not a lot. This is simply because as time goes on I can estimate better.

Now this has been an unusual week and the battery has survived because the week has ben punctuated with some travelling and a couple of times I ran the engine  and the wee solar panel has helped a little.

But more power is needed for this damned technology.  I don’t need 72AH per week. The leisure battery can still supply a fair amount of power before it reaches 50% charge and the last weeks consumption is abnormally high.

So I replaced the 10W panel with a 40W panel (it still fits inside under the roof window) I can get 4 times what I calculated  last time -about 8AH per day, probably 12AH per day in the summer months.  That would cover everything we use.

In the winter I will get less from the solar panel, but 45 mins running the engine (stationary or travelling) would compensate for a days usage.

The usual method of using a panel is to attach it to the roof then use a charge controller to regulate the charge. Reading on the forums, the biggest hassle seems to be with charge controllers and the fitting of the panels.  So I decided to fit a 40W panel INSIDE the van under the roof window and not use a controller.

After a few days of glorious sunshine without a controller , the batteries were up to 15.6V.  This is too high, so obviously a controller was needed, so I made one. 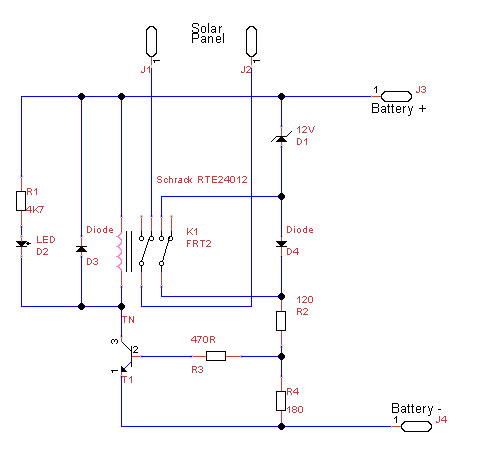 Update – After  a weekend at a folk festival with overcast weather every day, the leisure battery showed around 13.5V every night and around 12.7V every morning. This was charging two phones and ipad, a laptop, operating the lights (including the awning light for around 3 – 4 hours).
The job’s a good’un

The panel supplies BOTH the leisure battery and the vehicle battery. They are separated by a couple of diodes so they can both be charged by the solar panel but cannot discharge into each other. This means that the lowest voltage is charged first then they charge together until the leisure battery reaches 14V.  So the panel is looking after them both. The added bonus is that the small steady drain to the remote locking mechanism is compensated for.

I think the Nuevo habitation electrics are now finished.

We have had it now for 5 years and covered 80,000 miles, spending hundreds of nights in the van.  We have used a hook up once the only time we were on a campsite.  The rest of the time has been wild camping or a folk festivals with few amenities.

Update.  A few days ago the company I bought the van from phoned to ask if I’d like to trade it in.  I considered the offer for a millisecond before saying NO.  I have not seen ANY van which is more suited to our lifestyle.

Update 9/8/2020
Thanks to Covid 19 the van has not been used since late last year. The solar panel and charger have kept both batteries at 13.2V without attention.

Update 13/04/2022
We only had one trip in the van last year, but now we are getting it ready for this year.  When I pushed the button to check the battery voltage I blew a fuse!  It turns out this is a fault in the digital panel meter.  I disconnected it. But thanks to the label on the fuse box telling me the fuse number and the position, it was fixed in couple of minutes.  A new panel meter is on order.
The system has performed flawlessly and both batteries are still at around 13.2V.  But the leisure battery (Varta LDF90 which has been flattened once – see above)  and starter battery (019 Enduroline ) are  four years old now. We are heading off for a longish trip soon, so we will see how they are doing.