Definition
My measure of mortality is the number of new deaths this week divided by the number of new cases18 days ago.  It could be defined in lots of ways but this measure is as good as any.
The graph below shows how the mortality has changed since September last year.

We can see how mortality got significantly worse during the third wave, rising to over 3%.  Some of this was probably due to the new strain if the virus being more lethal, and some would be due to the overloading of the NHS.
In February the mortality leveled out at about 2.2% which is probably the level for this strain.
Towards the end of February mortality began to drop. This was probably due to the effect of the vaccinations. Around 20% of the population were vaccinated by the first week in February and this would be having an effect after around 3 weeks.

BUT (there is always a but)
It is interesting to look at this measure in other countries.
Here is a comparison of the Scandanavian countries

Why should some countries have a better Mortality rate.  Is it because they have a less lethal version of the virus?  More likely is simply that they are getting a bigger percentage of people being diagnosed with the virus. This could be due to :-

This becomes more interesting when we look at the graphs.  Here is a graph showing the growth in new cases over the last eight weeks

We can see that the UK is improving, and seems to be doing better than Norway, Finland, and far better than Sweden.
But when we look at the death rate:-

We are considerably worse than Norway, Finland, and Denmark, and only a little better than Sweden.  France, Germany, Italy, Iceland, Norway, Finland, Denmark and Sweden all have similar vaccinations ratios, but the apparent mortality rate is much worse in Europe than Scandanavia. (Israel has vaccinated virtually it’s entire population but deaths are still worse than most of Scandanavia or even the UK.)
Why? Is it false positives? Or is it the population taking the situation more seriously, and getting tested? This may well be the case and maybe that is happening in th UK too.

Meanwhile in the UK
New Cases have levelled out at around 400-700 per million of population. This may be due to that small percentage of the population who are ignoring the guidelines. But, hopefully it is due to the increased use of lateral testing. The graph blow shows how the number of tests conducted has doubled in March. 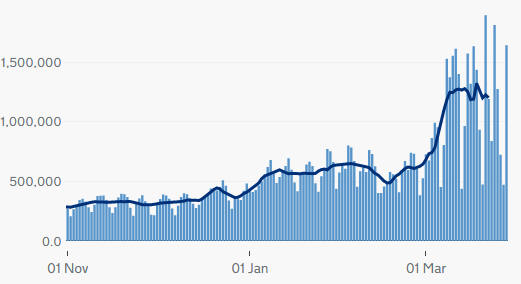 New deaths continue to drop at around 30% per week, probably due to the Vaccine.

UK Restriction are being relaxed over the next few weeks.  Cases will almost certainly go up, the question is how much.

Vaccinations are doing incredibly well, but supplies will be constrained over the next few weeks

Around 45% of the UK have had their first dose. But the comparison between Israel and Scandanavia above indicates that the vaccines are not the 100% solution.