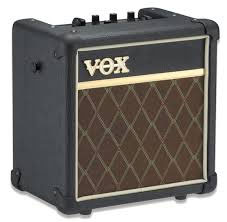 I decided to build something more aligned to what we do. The things we needed were

What follows is the final iteration, I learned a lot in the process. 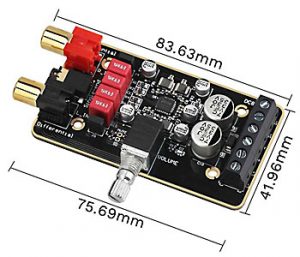 To get the power, I bought a Class D Amp.  It is capable of providing 30 Watts (15+15) into 8 ohms with a 24V supply. The module is sold as PAM8620 although that is actually the ID of the chip. It is sold by lots of Chinese suppliers
Although it is a stereo amp I only use one channel, and a 10 or 12V supply. The amp can drive to within a volt of the rails or which gives about 5 or 7.5 Watts (depending on power supply) into an 8 ohm speaker. It has a volume control and I found it could reach max power with only 0.7Vp-p at the input with the volume turned up full giving it a max gain of 40 (or 32dB).  This is what the datasheet says is the maximum, but the details indicate a max gain of 33dB. 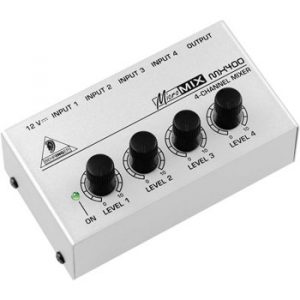 To get the 4 channel input I use a Behringer MX400 mixer which I had bought some years ago.  It takes a 12V DC supply.  Despite the fact it sold as a line mixer and not a microphone mixer I found it worked fine with mics and instruments with both active and passive pickups.  It has a max gain of 100 (or 40dB).

It’s not the quietest of amps, but there is a lot of background noise anyway while busking so a little hiss will go unnoticed.  In fact the hiss was slightly less than the DA5 original amp.

When we busking we now use a single mic and two instrument pickups.  We do not do close miking, and if we keep the level down to 7.5 we are unlikely to saturate the mixer. So we keep the mic input on 7.5, and adjust the levels on the instruments to suit.  Our usual instruments are a guitar and a mandolin, both with passive pickups.  This means we do not have to think about setting levels on the instruments.  With a little experimentation we have found that the guitar input is 2.5 for finger picking and 2 for hard finger strumming.  The mandolin setting is zzz.  The eight string Uke does have a built in amp so we set that to aaa and the mixer to bbb (or zzz – same as Mandolin maybe?) An advantage of this is that we can get the vocal/instrument balance the way we like it, and if using someone else’s equipment, we can simply plug in our mixer to their amp, and we won’t get a sound “engineer” ending up drowning our voices out.

What does the amp sound like when it clips?????  This is not easy to find out. a 5W amp is pretty loud and will disturb the neighbours.  We have to take it somewhere remote (up on Bodmin Moor) where we will only disturb the sheep.

You really can’t tell from behind the mic if the amp is distorting the signal due to clipping. After a lot of agonizing and thought I decided to take advantage of the fact that the Class D amp is a push-pull device.
At maximum output as terminal A of the speaker reaches the maximum positive voltage – about 1 Volt below the positive rail, terminal B is at the minimum voltage – about 1 volt above the negative rail. Then terminal A goes down to the minimum and terminal B goes to the max.
I decided to just use one terminal, and look at the negative swing.  When it gets below 1.2V above the negative rail (0V), the clipping inductor will light.  The supply voltage is either 10.4V from a rechargeable battery pack or 12V from alkalines. The circuit will give a clipping indication at 18.4V p-p or 21.6V p-p which corresponds to 5.3 or 7.3W rms.

The circuit is very simple. T1 is usually switched on unless the voltage at the input falls sufficiently low to turn it off.  This will happen at about 0.6V across D1 and 0.6 base-emitter voltage of T1. The collector

As I mentioned above we need more power for the mic inputs then the standard VOX DA5. I added an extra preamp to the VOX and it worked but after one session a friend told us that we had been distorting.  It’s very hard to tell from behind the mic. So a clipping detector was needed. 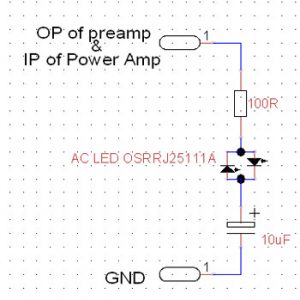 I agonized over this.  I finally came up with the simplest circuit I have ever seen using only three components. A 100ohm resistor is in series with and AC light emitting diode and a 10uF capacitor. That’s it. It is placed across the output of the mixer and the led comes on when the voltage exceeds +/-1.7V.
The power amp volume is then set so that with 3.4Vp-p signal  is just not saturating.  We note the position of the pot. This is important.

(I set the knob on the volume control
so that the index line points at the clipping led at this point)
With practice we can find the mixer settings which will just not cause the led to light, then turn up the power amp to suit the location as long as we don’t go above the predetermined pot position.

If we want to use a single mic that we cannot get really close to, then additional gain would be needed.  Probably around 10.  The simplest method is to add a low noise battery driven amp into the mic lead.
The neatest method would be to replace the mixer amp with a single channel higher gain amp.  Maybe less versatile though as we could not add other inputs. 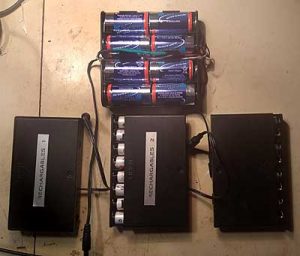 The class D amp is much more efficient than the VOX and also take much less quiescent current so we can run for longer on the same batteries as the VOX.  In addition I can power it from a bank of 8 rechargeables, or 8 C cells. I have the following options

Two banks of 8 rechargeable AAs  providing 9.6Volts. and 2000mAH each

One bank off 8 AA Alkaline batteries providing 12V and 2500mAH

The Cost
To keep the cost down, I used the VOX cabinet.  It’s a nice size with a good speaker capable of taking 10 Watts and there is plenty room inside for batteries.
Now I went through quite a few iterations of the amp so I now have quite a few spare parts in my junk drawer.  But if I were to do this again I’d seek out an old broken practice amp and pay a few pounds for it, Fit the power amp under £10, a MX400 for around £20 and I would expect all of the other bits to come in at £10-£15. So around £50-£60

Tone Control
I finally decided against a tone control in the amp. The only place it could go would be between the mixer and the power amp which would mean that the clipping detector would be unreliable. 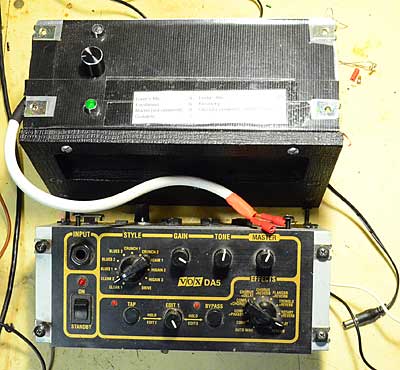 I cut and bent a piece of aluminium to fit the top and rear aperture copying the DA5 amp measurements and hole spacing.

The top panel (top) is pretty simple, especially compared to th DA5 (bottom). The green led is the power indication, the other led is the clipping indicator, and the knob is the volume. 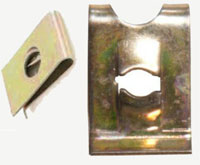 I then drilled the aluminium plate to take spire nuts as used by the DA5.

After fitting to the box and doing a quick test I found the aluminium buzzed like billy-O so i stuck some hardboard to the back using double side sponge tape.

I drilled holes in the hardboard to fit some Neodymium ring magnets to hold the mixer in place during performances if we want it there. (But it is fitted to long cables so we can use the mixer around a metre from the amp)

The aluminium did not look “cool” so I covered it in black Gorilla tape.

Overall the amp is very simple.  The commercial mixer feeds the commercial class D amp which feeds the speaker. The battery pack feeds them both through a power switch. A simple peak detector is connected onto the link between the mixer and the class D amp.

Power: Peaks at less than 1 Volt from rail. So 22Vp-p or 17.2Vp-p  depending on battery which corresponds to 7.5W or 4.6W.
(Note: The original DA5 would not manage more then 3Watts without clipping on batteries)