The graph below gives a comparison of the four home nations showing deaths per million of population. per week. As an example England’s current daily covid toll is 430 per week, the population of England is 56 million, so the death toll per million is about 8.

By comparison, Wales is showing 12 deaths per week, the population is 3.1 million so the death toll is 4. 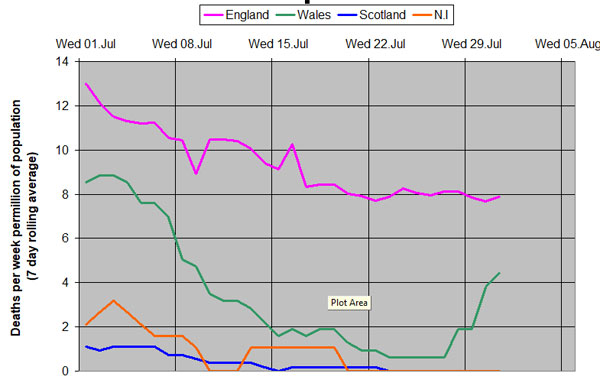 We can see that England’s death rate is currently not reducing.  This points to an R value of around 1.  Wales looks like it is increasing, but when the actual numbers are so small (2 or 3 a day then small variations can have a big effect on the statistics.
Scotland and Northern Ireland have had no deaths for quite a few days.

The graph below shows the growth rate of infections in England. The blue line is the day to day variation in the 7 day average, taking each day as a change in percentage of the previous day. So if it is below 0% then the number of cases is going down.  The pink line is simply a further 7 day average of these figures, and the black line is a best straight line fit. 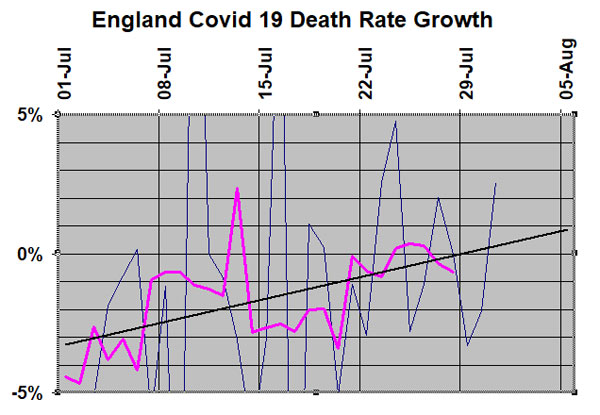 Although the figures jump about, a trend is apparent indicating that the R rate for England as a whole is now around 1 mirroring the flattening of the curve in the previous graph.
Now, this is the death rate which will follow the infection rate of around 6 days ago (see Victoria data below)
The governments strategy to deal with this is to introduce local lockdowns and some are now in force.

A major problem the government faces is getting reliable statistics on the spread of the virus. The fatality rate of the virus is generally accepted to be about 1.4%.  In England the death rate is about 60 per day, so around 6 days ago the new cases must have been around 4300. We recorded only 770. The vast majority of infections go undetected.

Compare with the current situation in Victoria Australia.

In Victoria, in the first wave, the cases peaked at 516 cases per day on April 2nd. Deaths peaked around April 8th at around 8 cases per day.
This would indicate a six day delay between cases being recognized and deaths, and a 1.55% mortality.
There were no deaths between 1st May and 10th July.
Total cases up to 30th April (six days earlier) were 1361, and deaths to date were 18 indicating a 1.3% mortality. We can assume a 6 day delay and a 1.4% mortality.

NOW in the last week Victoria has reported 52 deaths. Following the figures above we would expect Victoria to have recorded around 3700 cases in the week ending 6 days ago. Only 2760 cases were reported so 1000 cases are unreported and this is  probable cause of the continued spread, resulting in the severe lockdown and curfew in Melbourne.

In the UK, a far greater proportion of cases go unreported, but our cases tend to continue to drop albeit very slowly in England. Why?
Perhaps this is because the population in general tend to stick to the governments guidelines.
The graph below shows how, even after the first wave, the virus can still spread very rapidly. 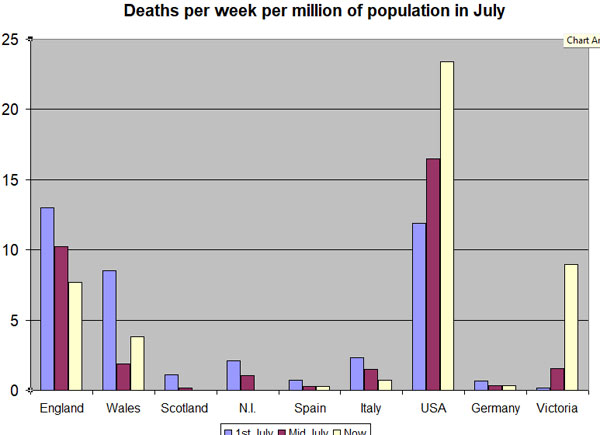 The USA’s death rate has almost doubled in a month, whilst Victoria’s has increased by a factor of 30, indicating an R value of well over 2.

This could happen anywhere where the population do not take common sense precautions.  As shown in the first two graphs above, England is currently very close to a tipping point.

What will the month of August bring?