The UK government announcements are focused on something called the R value.  This is a value which is difficult to calculate, can be calculated in different ways.

I find it far easier and more intuitive in the case of the Covid19 virus to simply use the growth value. Basically this is

This figure jumps about all over the place, but by smoothing it out, firstly by switching to a weekly number (as the weekends always produce lower numbers, and then making a seven day rolling average the graph becomes readable.. The graph below shows these figures for the UK. 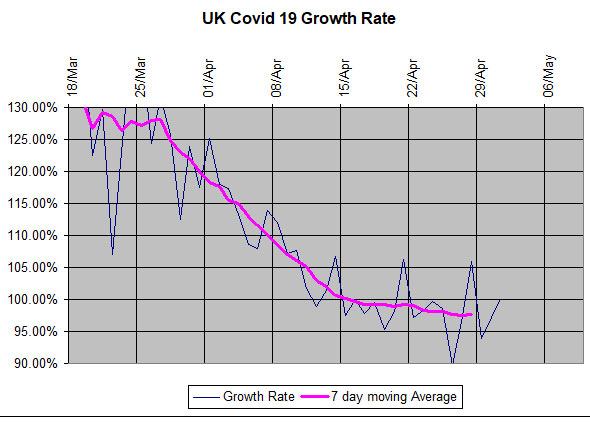 When the growth rate is above 100% the virus is spreading, the higher the faster. When it is below 100% the number of cases each day is decreasing. We can see from the graph above that we passed the 100% point around 16th of April, and the rate is now at 97.5%.
The lower the rate the faster the reduction in mortality. 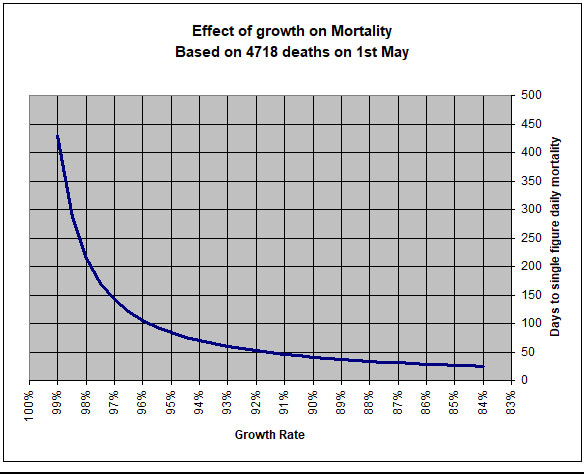 The graph above shows how long we can expect the pandemic to “last” is dependent on the growth rate.  For example at todays rate (1st May) of 97.5% it would take us about 170 days to reach a mortality of under 10 deaths per day.  In this time we would see around another26000 deaths

If want to achieve this faster then we need to reduce the growth rate further.  Is this possible?
China achieved a growth of around 93%.  If we did that then we would reach the under 10 death per day figure in about 60 days, and reduce the extra deaths to around 10,000.  But Wuhans lock down was brutal, and it was only one city with the rest of China to support it.

Lockdown
When will the government ease lockdown? They will probably want to get the growth rate down lower than it is now, but easing of lock down restrictions could case a rise in the growth rate, possibly up to over 100% and the disease would start spreading again.

Hopefully when the government can deliver PPE to the hospitals and care homes we will see the growth drop further.  Currently death growth in care homes is around 104%, and the deaths account for 40% of the UK total. Hospital only deaths growth rate

We must also remember that 739 people died today, and the mortality rate is 3.5% so about 25,000 people were infectious around two weeks ago.  Rates are not dropping fast, soaround 25,000 people are still infectious.

Update 2/5/2020
If we take Australia and New Zealand figures (both of whom do a proper job of testing) then the mortality rate is only 1.36% this means that, in the UK around 54,000 people are still infectious.

300 people have died in care homes. Now mortality is much higher in the elderly, maybe 10%. So around 3000 people were infected about 2 weeks ago. There are more now.

UK hospital deaths show a growth rate of just under 96% which is much better than the 97.5 for the whole of the UK.  The difference is due to the care homes.
I have saved the results from before the UK changed the figures to include care home deaths.

The government are not providing graphs on care home deaths, so here they are:- 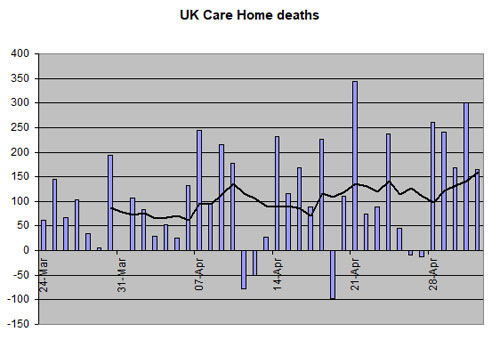 The negative values are probably due to data errors in the care home data, but the 7 day average (the black line) shows an obvious positive slope showing that the death rate is increasing.  Almost certainly due to lack of PPE.

Update 04/05/2020
On a very macabre note the latest statistics from the government show 315 new deaths overall and 369 in hospital for May 2nd.  This implies that the care homes are helping the figures by having 81 resurrections!
I think its an admin error and the figures are reversed so the actual deaths are higher than published.

Grant Shapps in now admitting that there would have been few deaths if the UK had a greater testing capacity.

Italy locked down on 9th March with 463 deaths.

Spain locked down on 14th March with 196 deaths.  They did not learn from Italy.

The UK locked down on 23rd March with 359 deaths. Our government did not learn from anywhere.

Had we locked down around the same time as Italy we could have been in a similar position to New Zealand or Australia with total deaths in the low hundreds.  Instead Total deaths will be around 40,000.