This article was published on 8/4/2014. The fourth in a series of articles about my experiences with the electrical system and the leisure battery in my Motorhome.

SO after all of the calculations and planning, there we were ready to set of for our first festival at Moffat.

We had been been happy with our new battery but while I was arranging the van I noticed liquid in the battery box. Yep, it was battery acid. So I removed the battery and used kitchen roll to soak up over half a pint of acid. Fortunately the battery box is water proof. One cell in the battery was only about 1/3 full. I decided against using it.

But we had a festival to go to! The old 70Ah battery was 550 miles away. But I had bought a tiny 44AH battery for my old caravan two years ago. When I laid up the caravan I brought the battery into the house, connected it to a 12V power supply (probably originally off an external disc drive) via a digital timer that switched it on for 1 hour each night. How would a two year old unattended 44Ah battery cope?

It was all we had. I installed it and set off on the Thursday afternoon. We parked in a space in the main street and used the battery as usual, although we did tend not to leave lights on unnecessarily . Not dark you understand, but just taking a little care.
I used the switch I had installed to switch off the control unit so that when we retired, current drain was limited to the fridge re-igniter only.
I had foolishly left my tablet (Nexus 7) switched on with the sat nav running, so we arrived with a flat tablet battery. I put it on charge from the habitation battery and left it till it got to about 50%
On Friday morning the voltage was 12.66V. More than I had expected. We continued, keeping an eye on the power and on Saturday morning the voltage was 12.57V, on Sunday 12.48V.
It was a great festival and we decided to stay on Sunday night. On Monday morning I measured 12.38V. I reckon that’s about 65% charged. So we used around 15Ah over Thursday night, Friday, Saturday and Sunday. We had the heater on most of the time we were in the van,

The engine was not started at all during the time and the battery had no charging from Thursday afternoon until we set of home on Monday, but the little 44Ah battery kept us going.

I’ve contacted the company that I got the Banner Battery from and I expect it to be replaced. Its 120Ah and a true deep cycle battery so I can expect 84Ah from it if pushed (as long as it doesn’t leak that is). I don’t think a week or two at a festival will be much of a problem.

Here is the estimate of the power we used.

I must admit I was pleased (OK, amazed) to see how close the power calculations tied in with the actual experience.

The trip home on Monday was about 90 minutes. I checked the battery on Tuesday morning – 12,9V – so it got fully charged on the way home.

So, what have we learned?

1. The power saving techniques work – there is no way that the tiny battery would have lasted us all of the weekend with the PDU system and the control panel

2. Using a simple digital mains timer and a 12V charger (not a battery charger) will keep a battery in good condition unattended. 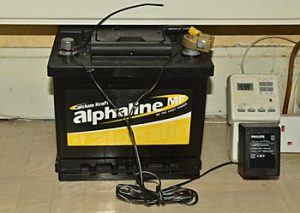 3. We used about 15AH over 4 days taking care. With the proper 120AH battery we will have over 80AH to spare – we COULD manage three weeks without a EHU or a charge. But we’d rather not take so much care, act normally, and two weeks are fine.